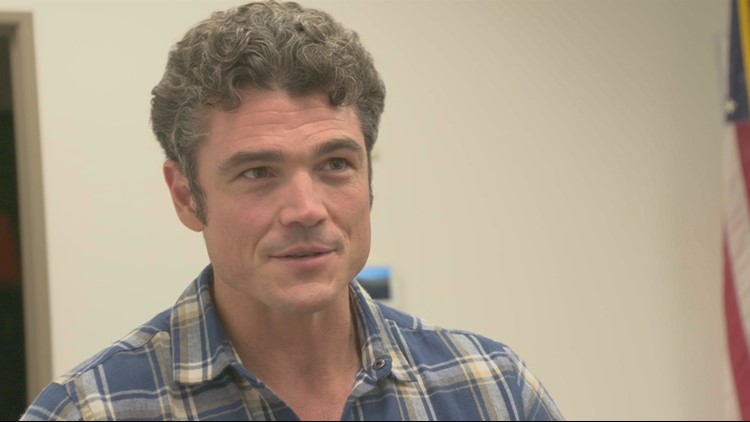 Republican Joe Kent, a Trump-endorsed candidate who aligns himself with the more far-right ideals of his party, wants to win over moderate voters in the district.

VANCOUVER, Wash. — For the past decade, Washington’s 3rd Congressional District — covering Clark County and Southwest Washington — has favored Republicans. The district voted for President Trump in the last two presidential elections, and Republican Jamie Herrera Beutler has represented the district in the U.S. House of Representatives since 2011.

However, in ousting Herrera Beutler in the August primary, voters now have a choice between Marie Gluesenkamp Perez, a working-class Democrat who often references the auto shop she owns with her husband, and Joe Kent, a President Trump-endorsed military veteran who aligns himself with the more far-right ideals of his party.

“We did much better than I think a lot of people thought we were going to do, and so we’re starting to move the Republican caucus,” Kent said at a town hall event Monday. “They’re at least starting to acknowledge that a lot of people out here they count on for votes and financial support, that this is where the party is actually at … it’s with the Trump ‘America First’ agenda.”

Editor’s Note: This report focuses on Joe Kent, the Republican candidate in the WA-03 race. A report on Marie Gluesenkamp Perez, the Democratic candidate, will air next week on KGW.

Kent’s campaign has galvanized WA-03 voters on the right edge of the Republican party, but now both Kent and Gluesenkamp Perez are fighting to win over the more moderate-minded voters in the district.

Kent, a Gold Star husband who grew up in Portland and currently lives in Yacolt, said he entered the congressional race as retribution for Herrera Beutler voting to impeach President Trump after the January 6 Capitol riots.

He told KGW he believes January 6 was an “intelligence operation” and that defendants are being held as “political prisoners.”

At a Clark County Republican Party town hall on Monday, Kent met with voters who praised his ties to President Trump, which includes his skepticism of the 2020 election results.

Kent said each state’s certification and review of the vote hasn’t been enough to convince him it was fair. He previously joined a series of lawsuits filed in Washington claiming county auditors in his district had “flipped votes.”


The judge’s order refers to the “nearly identical” lawsuits filed in other jurisdictions in which courts found the election fraud claims to be “frivolous and advanced without reasonable cause” and “not well grounded in fact,” in addition to the plaintiffs’ lack of standing in this particular case.

“I think we always need audits,” Kent said. “I mean, I won in August, and I would be ecstatic if we went and audited that. Same thing, I still want an audit of 2020.”

However, Kent told KGW he will accept the results of his upcoming congressional election.

Kent’s campaign originally declined interview requests from KGW. His campaign manager said Monday that “our policy with left-wing media outlets is to only do live interviews.”

RELATED: What’s with all the messy political ads in Southwest Washington?

At his core, Kent emphasizes what he calls an “America First” movement that criticizes current political leaders.

“Our establishment, Republicans and Democrats, administrative state, they have not been serving the American people and I think we need to change that,” he said.

Kent said the COVID-19 vaccine is “experimental gene therapy,” that he opposes any vaccination requirements and wants to defund the FBI.

Immigration is another major tenet of Kent’s campaign for Washington’s 3rd District. He calls for a moratorium on both illegal and legal immigration, saying H-1B work visas for foreign workers shouldn’t be permitted.

“I have a major issue with our ruling class thinking so little of our American workers that they want to import more workers to take away jobs from them,” he said.

He also said he wants to end birthright citizenship, which makes any person born in the United States a citizen, as defined by the 14th amendment to the U.S. Constitution.

“I think that has created a perverse incentive system that brings people over to this country, so I think we need to do away with that completely to end that incentive system,” Kent said.

At the town hall event, he told voters he would focus on obstructing and shutting down the federal government to prevent the passage of future Democratic Party policies.

“Normally, legislators come here and say I’m going to pass all these different bills and work across the aisle — we’re not there right now,” Kent said. “We’re also going to go after Joe Biden and impeach him and Kamala Harris.”

Kent has gained notoriety on national programs such as Newsmax, Fox News, OAN and Steve Bannon’s War Room this year.

Multiple times, he’s had to disavow ties to white nationalists or extremists.

In March, on a YouTube stream, he distanced himself from the comments of Nick Fuentes, a podcaster who the Anti-Defamation League describes as a “white supremacist” who has made racist and anti-Semitic comments.

Kent had previously tweeted in support of Fuentes and talked to him on a campaign consulting call, but said he didn’t want his endorsement due to his “focus on race/religion.”

“In particular, his comments about, ‘Hey we’re fans of Putin’ and leading the Putin chant, I think he was trying to be funny and get some laughs,” Kent said on the YouTube stream. “(Saying) ‘Hey being compared to Hitler, that’s not necessarily a bad thing,’ right — that’s bad, we don’t say those types of things out loud because they’re actually hurtful.”

Kent said voters should dismiss any concerns about his campaign’s connection to people with extremist beliefs.

“It’s nonsense, I have no connection to any of these people, like if you’re a white nationalist or white supremacist, I have no time for you whatsoever, these people actively worked against me,” Kent said, in reference to people that he said heckled him at his town hall events.

Kent criticized articles connecting his campaign to other people with extremist views – whether they previously consulted with his campaign, took photos with him, or interviewed him.

“The reason why these guys are coming over and attempting to align themselves and force their horrible agenda on (me) is because they see a gap within the Republican party — I think they see a revolution going on within the Republican party, because there is,” Kent said. “My staff is not out there screening everybody’s social media profile before they come in, I think that’s the wrong way to do business. So yeah, there are people that have called me, taken a picture with me, that have bought a t-shirt and worn it that have nothing to do with me.”

Kent said energy independence is the key to reversing inflation, so he calls for reversing green or clean energy plans in favor of American oil expansion.

He also said he wants to increase American manufacturing and stop sending money and support to Ukraine as part of a foreign policy plan that puts “American citizens first.”

“How do we move the Republican caucus more towards the America First agenda — step one was beating Jamie Herrera Beutler and we did that because of you guys,” Kent said to cheers at the town hall.