1st civil trial over Portland cops' use of force begins 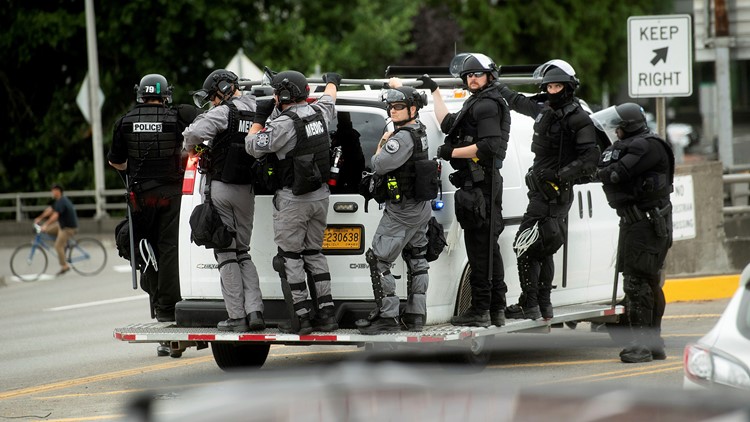 The complaint alleges the city’s failure to discipline officers it knew to be violent encouraged officers to continue violence against protesters.

The killing of George Floyd, a Black man, by Minneapolis police officers in late May 2020, sparked protests as part of a worldwide reckoning over racial injustice. In Portland, racial justice protesters clashed nightly with police and federal law enforcement from the U.S. Department of Homeland Security and the U.S. Marshals Service.

One such protester, Erin Wenzel, claims she was following police instructions on Aug. 14, 2020, when an officer “ran at her and violently slammed into her with a nightstick.”

According to her lawsuit, the force of the impact lifted her off the ground and she landed on her face. Wenzel says in her suit that she stood up and tried to keep walking but another officer struck her and a third knocked her down.

Wenzel broke her arm and suffered injuries to her wrist, face and torso, her lawsuits says. Wenzel’s complaint alleges the city’s failure to discipline Rapid Response Team officers it knew to be violent encouraged officers to continue violence against protesters.

Wenzel is asking for damages totaling $500,000. The trial is expected to run through Oct. 3.

In their response to the complaint, an attorney for the city of Portland, William Manlove, said protesters, including Wenzel, were wearing protective equipment including gas masks and helmets.

In court filings, attorneys for the city say police were trying to stop protesters from reaching the headquarters of the Portland Police Association, the city’s police union, where break-ins and fire damage had happened during previous demonstrations. The police declared an unlawful assembly and used a loudspeaker to order the crowd to disperse.

The city does not say Wenzel threw anything at officers or broke any laws. But it does argue that any physical contact the police made “was justified and privileged as it was reasonable and necessary to carry out those employees’ law enforcement duties.”

From May 29 through Nov. 15 last year, during the height of the social justice protests in Portland, the city’s police used force more than 6,000 times, according to a U.S. Department of Justice report.